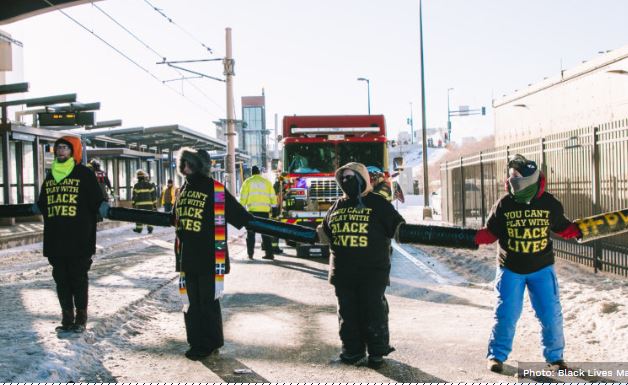 On Sunday, police arrested 17 Minneapolis Black Lives Matter activists as they protested the increased policing of their city during the Super Bowl LII.

Around 100 activists with Black Visions Collective, the Minneapolis chapter of the Black Lives Matter Global Network, shut down local transit to protest the fact that people without a Super Bowl ticket were banned from riding public transit. 17 of them were forcibly removed and arrested by police.

The protest was part of a week of actions designed to call attention to the increased policing and other negative effects the Super Bowl had on people living in Minneapolis.

About 100 protesters are blocking east and westbound light rail greenline at West Bank station. Chanting, “If you shut us out, we shut you down.” pic.twitter.com/5FCz7uOWAr

“We’re calling attention to the many ways the Super Bowl negatively impacts communities of color,” Miski Noor, an organizer with Black Visions Collective, said in a press release. “From banning our use of public transit to the presence of [U.S. Immigration and Customs Enforcement], to gentrification invading our neighborhoods, Super Bowl LII illustrates the disconnect between American ideals and our lived reality.”

The FBI’s Minneapolis Division and the Minneapolis Police Department have planned the policing of this year’s Super Bowl for two years, and security for the event cost at least $3.7 million.

Black Lives Matter activists called attention to the fact that the this policing effort wasn’t targeted at mostly white Super Bowl attendees. As Eagles fans celebrated their team’s victory by flipping cars and throwing rocks through storefront windows, only four people were arrested. More than four times that number of people were arrested during Sunday’s disruption of public transit.

“It seems there’s a line drawn in the sand where destruction of property because of a sports victory is OK and acceptable in America,” Black Lives Matter New York President Hawk Newsome told Newsweek. “You can riot if you’re white and your team wins, but if you’re black and being killed, you can’t speak out.”

Meanwhile, the Department of Homeland Security championed “the largest interagency force deployed to a Super Bowl site in history,” including personnel from ICE.

We have shut down the light rail system in Mpls-St. Paul because YOU TRY TO SHUT US OUT, WE SHUT YOU DOWN. pic.twitter.com/qvLM0fcCN9

The presence of ICE throughout Minneapolis in the week leading up to the Super Bowl created risks for any undocumented residents who happened to live or work in the area. Though ICE claimed that its role at the Super Bowl “is not related to immigration enforcement,” the agency reserved the right to check the identification of anyone “suspected to be involved in the sale of counterfeit goods.”

“Minneapolis is no exception to the increased level of fear and anxiety immigrant communities are feeling since this administration took office,” state Sen. Patricia Torres Ray (DFL-Minneapolis) said in an interview with Rewire. “Because of how big this event is and how chaotic it will be, I’m afraid days will pass before we know people have been picked up.”

Protesters on Sunday also hoped to draw focus to the amount of money Minneapolis has spent on the Super Bowl, when it has failed to provide some basic public services to residents.

“The city has failed to provide critical resources such as mental health, protections for sex workers, affordable housing, jobs, and education, and instead poured money into the pockets of big corporations who benefit from the Super Bowl like U.S. Bank,” Noor said.

Minneapolis hasn’t made public the amount of money it spent on the Super Bowl. Black Visions Collective activists said they want more transparency and community oversight of the decisions the city makes around major sporting events.

In addition to the public transit protest on Sunday, there was a rally to protest police violence and racism organized by Take a Knee Nation. The group was inspired by the peaceful protest started by former San Francisco 49ers quarterback Colin Kaepernick kneeling for the National Anthem during the 2016 NFL season. Kaepernick sparked a national movement; on one weekend in 2017, more than 150 NFL players joined his protest.

Kaepernick’s actions were not without consequence — he wasn’t signed by any NFL team during the 2017 season, and has accused team owners of colluding to keep him out of a job as punishment for his activism. Perhaps due to public pressure and employment concerns, no NFL players took a knee during this year’s Super Bowl. But hundreds of protesters inspired by Kaepernick’s movement showed up to take a knee outside the stadium.

Black Lives Matter organizers cited NFL players taking a knee as part of the inspiration for their public transit shutdown.

“Activists are using this moment to stand with athletes who have protested throughout the past two football seasons calling attention to the murder of Black people by police,” organizers said in a statement.