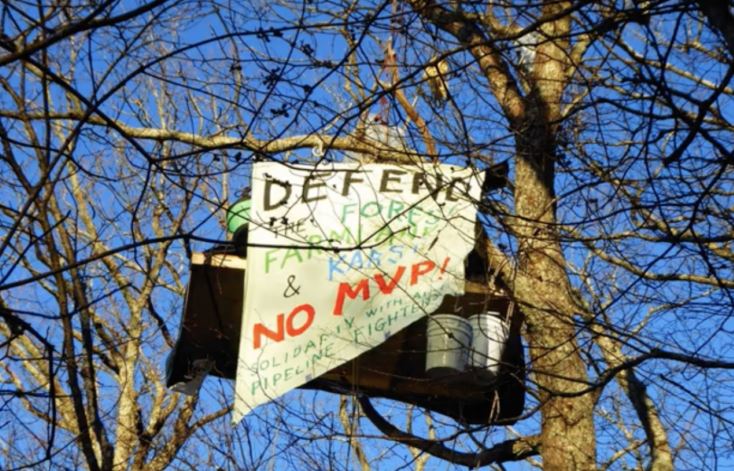 The tree sitters vow to remain in their perches to fight the pipeline and “defend and protect the land and water which West Virginians and Virginians survive off of.”
A group of hardy tree sitters has just won a victory against the Mountain Valley Pipeline project.

For 23 days, the protesters have been perched in trees on the top of Peters Mountain in remote Monroe County, West Virginia, and lived on platforms covered by tarps to protest the MVP’s plans to cut down trees and bore a hole underneath the Appalachian Trail as part of a planned 303-mile natural gas pipeline project running through West Virginia and into Virginia.

It has not been easy. It has been cold and wet for much of the last few weeks in the area. To make matters worse, more snow is expected this week, bringing along with it frigid temperatures.

Yet on Tuesday, the tree sitters were happy to learn that they won an unlikely court decision that would allow them to stay in the trees a while longer.

In a surprise decision, Judge Robert Irons, who had previously said he planned to grant a temporary injunction in favor of the pipeline, instead denied the MVP lawyers’ request noting that there was a credible concern raised by the tree sitters’ lawyers who questioned if MVP had the right to raze the trees they were camping out in.

As a result, the tree sitters can stay in their trees for now, blocking the construction of a critical part of the pipeline project by camping out in its path.

“If we’re in this tree they can’t cut it and they can’t cut nearby without endangering our lives,” one of the tree sitters told the Roanoke Times last week when it seemed unlikely the hearing on the injunction would go in their favor. She also explained that she would stay up in the trees as long as it would take to “defend and protect the land and water which West Virginians and Virginians survive off of.”

Residents who oppose the project boring through their backyards, many who have launched their own protests on the ground, were also pleased by the surprise victory.

Another resident expressed gratitude for the tree sitters willing to protest to protect West Virginia’s environment.

“I know it’s absolutely frigid where the sitters patiently wait, making the stand that few of us are capable of doing,” Laurie Ardison told the Roanoke Times. “The solidarity has been and is now, more than ever, as important as the air that we breathe. Words barely touch the feelings of concern and gratitude we hold for those who sit for us all.”

It is unclear what the MVP team plans to do next.

MVP lawyer Scott Long made it clear in court that the tree sitters were in the way, pointing out, “They’re in the area that we need to fell trees, and they’re interfering with that.”

The project’s spokesperson Natalie Cox suggested they would move on to other sections of the pipeline for now.

“While we are disappointed with the Court’s decision, the MVP project team will continue to move forward with construction activities along other portions of the 303-mile route,” she said via a statement after the ruling. “As always, we respect the opinions of those who are opposed to the MVP project and we want to ensure everyone’s safety throughout the various phases of the construction process.”

Meanwhile, a network of local supporters has been providing food, water and support for the tree sitters as they remain in their perch to stop what protesters insist is an environmentally-damaging project fueled by corporate greed.