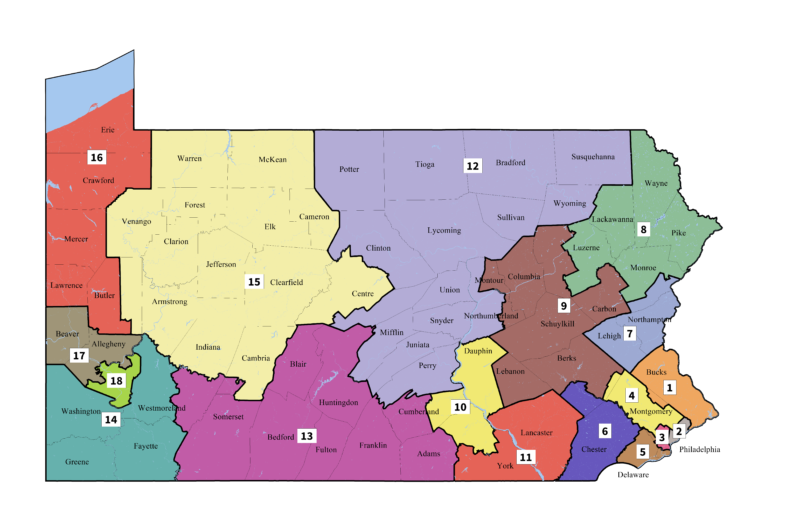 With the Pennsylvania district map upheld — and the candidate filing deadline passed — a look at who’s running in the primaries for each of the state’s new House districts.

After a one-of-a-kind first three months of the year, featuring a court-ordered re-drawing of the state’s congressional map, a court battle over that order, and a separate congressional special election under the old map that’s now finally over, it’s finally time for Pennsylvania to begin its primary season in all 18 of its new congressional districts. Those races may very well determine which party starts 2019 with control of the House of Representatives.

The filing deadline for candidates passed earlier this week, just one day after a pair of court rulings exhausted all remaining challenges to the new map — so now we know who’s running and where. More than 90 candidates are running for 18 seats. The candidates are politicians, doctors, military veterans, pastors, professors and quite a few who are more than one of the above. And with a couple dozen women running, there’s a good chance the currently all-male Pennsylvania delegation won’t stay that way in the next Congress.

Let’s go district by district, ahead of the primaries on May 15:

1st: The new 1st Congressional District consists of most of what used to be the 8th District in the Philadelphia suburbs, centered on Bucks County. Republican Brian Fitzpatrick is the incumbent and is facing a primary challenge from Dean Malik. Three Democrats are vying for the seat: Rachel Reddick, Steven Bacher and Scott Wallace. A reported internal poll has Reddick leading in the Democratic primary.

2nd: The new 2nd Congressional District matches some of the previous 1st District, mostly in the city of Philadelphia. It’s a solidly Democratic district in which Democratic Rep. Brendan Boyle is running, while facing a primary challenge from Michele Lawrence; David Torres is the only Republican in the race. Bill Green, a Democratic state School Reform Commissioner, opted against a run.

3rd: The 3rd District, which takes up most of what used to be the 2nd in the city of Philadelphia, has a Democratic incumbent, Rep. Dwight Evans — although Evans has a Democratic challenger, pastor Kevin Johnson. The Republican candidate is Bryan Leib — the Philadelphia Young Republicans treasurer, who you may remember as the guy who told a Philly.com reporter last November that a woman got up and left a date with him after he mentioned that he voted for Trump.

4th: The new 4th District takes up most of Montgomery County, in the Northern and Western suburbs of Philadelphia. There’s no incumbent, with Boyle running in the city district, but four Democrats are running, including Joe Hoeffel, who served three terms in Congress (from 1999-2005) and later ran unsuccessfully for both U.S. Senate and governor. Other candidates for the seat include state legislators Madeleine Dean and Mary Jo Daley, and Shira Goodman, the executive director of the gun control group Cease Fire PA. Businessman Dan David is the lone Republican running.

5th: The 5th District is, by far, the wildest race in the state this year. Consisting of Delaware County and some parts of South Philly, the district takes up parts of the former districts of two retiring congressmen: Democrat Bob Brady and Republican Patrick Meehan. Seeking to fill the seat are two Republicans: corporate commodity executive Paul Addis and former senior deputy attorney general Pearl Kim, who has the backing of the Delaware County Republican Party- and 14 Democrats. Favorites include the Brady-backed former Philadelphia Deputy Mayor Rich Lazer, Radnor Democratic Committee Chairman George Badey, scientist Dr. Molly Sheehan and former CIA officer Shelly Chauncey. But since 14-candidate races are rare, this one could go any number of directions.

6th: In the 6th District, which comprises Chester County and the city of Reading, Republican Rep. Ryan Costello is running for re-election — for now — but is said to be considering backing out. Attorney Greg McCauley, Sr. is opposing him in the GOP primary, while the lone Democratic candidate is one of the strongest running anywhere — Chrissy Houlahan, an Air Force veteran and ex-teacher.

8th: In the 8th District, now taking up Northeast Pennsylvania, Democratic incumbent Matt Cartwright is running again, with a trio of Republicans — John Chrin, retired corrections officer Robert Kuniegel, and Joe Peters — vying to challenge him. Sean M. Donahue, an open white nationalist, was running for Congress in this area at one point, but appears to have not filed the official paperwork.

9th: The 9th District now represents several counties in the central-eastern part of the state, and there’s no incumbent; three candidates of each party are part of the race. Denny Wolff, a former Secretary of the Pennsylvania Department of Agriculture and “prominent farmer” is among the Democrats, along with Laura Quick and dentist Gary Wegman. The Republicans are Schuylkill County Commissioner George Halcovage, Jr., former Secretary of Revenue Dan Meuser, and former CIA officer Scott Uehlinger.

10th: Moving southwest, the 10th District now comprises Harrisburg and the surrounding areas. Republican incumbent Scott Perry — he who recently went on national television and claimed ISIS involvement in the Las Vegas massacre — is running unopposed in his primary, but there are five Democrats in the race. These include former Congressional aide Shavonnia Corbin-Johnson, Harvard-trained scientist Eric Ding, decorated Air Force officer Robert “Alan” Howe, former Army officer George Scott, and Christina Hartman, who ran in 2016 against Lloyd Smucker and had been eying a rematch before switching districts.

11th: The new 11th District, consisting of Lancaster and York counties, remains Smucker’s, though he faces a primary challenge from Chester Beiler. The Democrat is Jessica King, the head of a nonprofit whose endorsement by local Democrats drove Hartman to run in the 10th District.

12th: The new 12th District, in a huge swath of north central Pennsylvania, has incumbent Tom Marino, whose nomination to be President Trump’s drug czar was scuttled following a report last year that he had pushed for legislation that both contributed to the opioid epidemic and hindered the DEA. You’d think something so monstrously evil would be the end of an elected official’s career — but Marino is not only still in Congress, he’s running again. Bradford County Commissioner Doug McLinko is challenging him in the GOP primary, with two Democrats in the race too: Lawyer Marc Friedenburg and Judith Herschel.

13th: The new version of the 13th District takes up much of the area in southwestern Pennsylvania long served by the retiring Republican Bill Shuster, and his father before him. Brent M. Ottaway, a professor, is the only Democrat, while eight Republicans are running, including state lawmakers Stephen Bloom, John Eichelberger, Colonel Douglas V. Mastriano, businessman and perennial candidate Art Halvorson, and four others.

14th: The new version of the 14th District consists of the Pittsburgh suburbs to the south and west, including some parts of the former PA-18. Republican Rick Saccone, who finally conceded to Conor Lamb Wednesday, may have run one of the more lackluster campaigns in memory — but he’s running for Congress again immediately, now in the 14th, and facing State Senator Guy Reschenthaler in a GOP primary. Four Democrats are running, including Bibiana Boerio, a former executive with Jaguar Cars who was also a staffer to ex-Rep. Joe Sestak. Also running are brain researcher Tom Prigg, surgeon Bob Solomon, and psychologist Adam Sedlock.

15th: This district, now in the northwestern part of the state, is represented by GOP incumbent Glenn Thompson, who is being challenged by two Democrats: Professor Susan Boser and biologist Wade Jodun.

17th: Major redistricting efforts often lead to races that pit a pair of incumbents against one another, but Pennsylvania’s this year will likely only offer one, in the 17th. Conor Lamb, the Democrat who two weeks ago won a surprise victory in the PA-18 special election, will run for a full term in the 17th, which will likely pit him against another sitting Congressman, Republican Keith Rothfus. But to get there, Lamb will have to defeat two other Democrats, including local activist Ray Linsenmayer and attorney Beth Tarasi.

18th: The new PA-18 is very different from the old: it consists of the city of Pittsburgh itself, and Democratic incumbent Mike Doyle is running again. While there’s no Republican candidate, Doyle’s Democratic primary rival, Dr. Janis Brooks, recently filed a complaint with the FBI’s Cyber Crimes Division after a website was created that implied she supports the Tea Party movement.