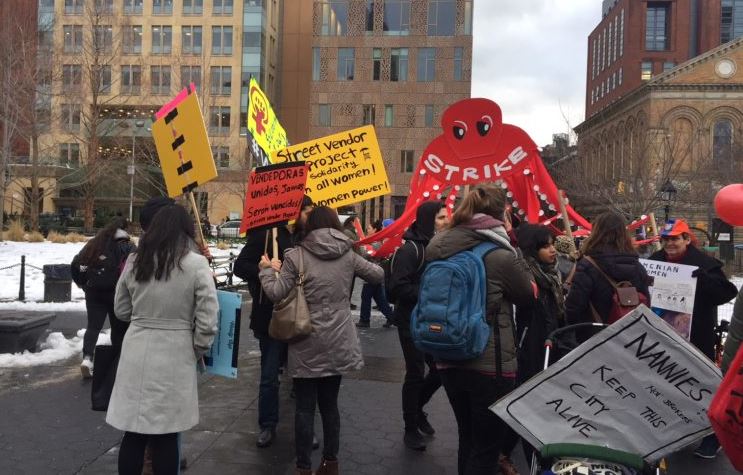 During the International Women’s Strike demonstration in New York, women and allies from all walks of life came together in support of international feminism.

NEW YORK — On March 8, hundreds of New Yorkers gathered in Washington Square Park to strike and march in celebration of International Women’s Day. The day’s events included a strike, a rally, and a march to various sites with historical feminist importance around New York City.

The first part of the event, from 4 to 5 p.m., was framed as an hour-long strike from work, in solidarity with women striking across the globe on March 8.

“We believe…a women’s strike to be both possible and fundamental in this political moment,” International Women’s Strike NYC, the group that organized the event, wrote on Facebook. “Therefore, we are pushing for an hour strike, relying on the power of simultaneity, to make our absence unavoidably felt at home, in communal spaces, and paid workplaces.”

International Women’s Strike NYC also emphasized the need for solidarity amongst women who may have different needs and abilities to strike for the full day.

“Our organizing process in 2018…has been more oriented towards building an ever wider coalition of diverse, though politically proximate radical organizations,” the group wrote in a statement published February 25.

During the strike portion of the event, activists from various groups occupied the space of Washington Square Park, talking and sharing literature. Nearly all of the groups represented carried posters noting the ways in which their feminist stances were linked to other causes, such as antiracism, anticapitalism, and anti-imperialism.

This intersectional view of feminism continued with a rally that ran for about an hour beginning at 5 p.m. The event included speakers from various groups in the International Women’s Strike NYC’s self-described “diverse and radical coalition.”

Speakers selected for the event had experience with work ranging from abortion rights and sex workers’ rights to healthcare for all and increasing the minimum wage.

Writer and scholar Tithi Bhattacharya, one of the national organizers of the International Women’s Strike, talked about the excitement of seeing women across the globe advocate for their rights. She referenced the millions of women striking in Spain and a massive and impactful transit strike in Italy.

Bhattacharya also spoke of the women who marched in Afghanistan, “proving Afghan women do not need to be saved by Western bombs. They can fight for their own emancipation.”

Other speakers, too, addressed the need for women of various backgrounds, and who experience varied forms of oppression, to work together.

“Palestinian women are integral in the struggle to dismantling patriarchy and its counterparts: capitalism, imperialism, and Zionism,” said Nerdeen Kiswani of the group Within Our Lifetime United for Palestine. “We look to Palestine for revolutionary inspiration and examples of revolutionary women that keep our struggle strong.”

“We believe that a woman’s autonomy and women’s liberation is impossible without supporting and standing and fighting for access to abortion,” said Delicia Jones of the group NYC for Abortion Rights.

“This is what we have to start doing, is to work in intentional, intersectional spaces to make sure that we are dismantling white supremacy, dismantling anti-blackness, dismantling respectability politics,” said New York Transgender Advocacy Group Executive Director Kiara St. James.

St. James also emphasized the need for New Yorkers to work with women across the nation in struggles against gender-based oppression. She mentioned so-called religious exemption laws being passed in the South, which allow private businesses to discriminate against LGBTQ individuals, ostensibly for religious reasons.

Hundreds gather at Washington Sq. to rally in favor of women’s rights and against heterosexism, racism, capitalism. #IWD2018 #InternationalWomenDay2018 pic.twitter.com/UPOU7NVmi0

Many of the women who spoke at the rally focused on the labor, both paid and unpaid, that they undertake to support themselves and their families.

“I’ve been a street vendor for more than 20 years, street vending to sustain my family. But I work while being accosted by the police. The police accost all of us street vendors,” Eliana Jaramillo, a member of the Street Vendor Project leadership board, said in Spanish. “Mayor De Blasio says that New York is a sanctuary city. That’s a lie.”

Jaramillo spoke of the fact that immigrants support New York City and the country as a whole, many of them as street vendors, yet they are often forced to do so without legal protections. The Street Vendor Project has been pushing DeBlasio to support a City Council bill that would expand the number of street vending permits.

Gizelle Marie, an organizer of the NYC strippers’ strike, spoke about the difficult working conditions she’s faced as a sex worker in New York.

“New York strip clubs banned me when I decided to use my social media platform to publicly speak about the working conditions in which other women and I were forced to work,” Marie said. “I have been fighting back ever since.”

Marie explained how precarious working in a strip club can be, without access to health benefits and the possibility of being fired for failing to meet racially biased beauty standards. She got choked up as she enumerated the reasons why she was striking — myriad examples of disrespect and mistreatment by strip club managers.

Anshu Khadka, a community organizer with Desis Rising Up and Moving (DRUM), discussed her experience coming to the U.S. and taking a job that paid her $25 per day for 12 to 14 hours of work.

“A year into being a member at DRUM made me understand two things. One, my labor was extremely exploited. Two, I was not alone in this,” Khadka said. “But most importantly, I understood that there was something I could do about it.”

With DRUM’s support, Khadka said, she filed for a back wage claim at her job. And in 2015, she conducted a study of workers in her neighborhood of Jackson Heights to find out if others were also being exploited.

Khadka’s study found that workers in the area made an average of three dollars per hour. But, she added, those numbers can be even more devastating for women.

“Women’s labor cannot be recorded with machines where they punch in their hours,” Khadka said. “Women, after having worked for hours at their workplaces, would switch to working for their children, their husbands, their brothers, sisters, and their families.”

After the rally, New Yorkers marched to several sites in the city with historic importance for women’s rights. Again, an intersectional view of feminism was on display.

Throughout the night, the overwhelming message was one of solidarity and power amongst groups of women who may have very different life experiences, but ultimately have a few key things in common.

“We all have the same financial obligations to society, and we face the same systematic oppressions that tell us we aren’t enough,” Marie said.